My index toes are longer than my big toes, and they really took a beating during the Marine Corps Marathon. What does toenail trauma look like? And how long does it take to recover? Check out my toenail timeline (and first attempt at an infographic!) 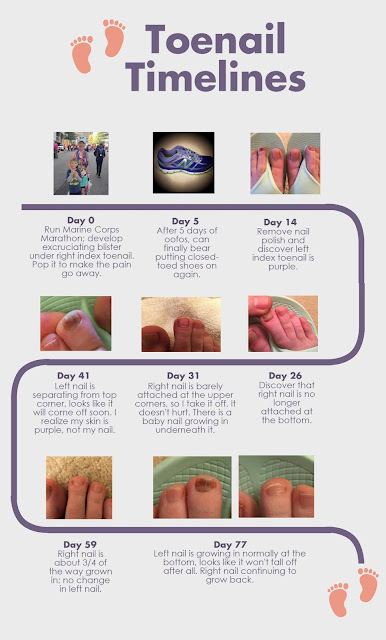 I suspect in another couple of months my toenails will look close to normal again. I thought about waiting until they were back to normal to complete my timeline, but it's been almost three months now and I figured they are close enough!
Posted by Kimberly Westrich 4 comments: Links to this post

Last night we kicked off PR Reston's Cherry Blossom Training Program with a happy hour/gear up party. It was a fun and informal way for participants to:

It was an especially timely event since the impending "snowzilla" means we are almost surely going to miss our informal kickoff run this Sunday. We were able to assure everyone that missing this run would not impact the training plan (which doesn't officially start until Monday), and that we would alert them by email about Sunday's status.

Almost all of the participants are in the "premium" program, which comes with a 2016 Cherry Blossom race bib. PR gives them a race code, and they use that race code to register for the race. We still have a limited number of registration codes available as of 1/22/16.

Each year participants receive a long-sleeve training premium from New Balance. It could be a shirt, hoodie, half zip, or jacket. We don't know what they will look like until they come in!

This year's training premium won't come in for a couple more weeks, and participants were given the option of selecting a past year's premium if they preferred. For some, it was like "Let's Make a Deal" as they tried to decide between the jacket or shirt they held in their hands and holding out to see what will be behind door #2.

We aren't going to let a little snow dampen our enthusiasm for starting our training. We may miss our informal run this Sunday, and we could be doing speedwork in a parking garage on Tuesday rather than the high school track, but we are ready to run and start our path towards making our Cherry Blossom race goals a reality!

Posted by Kimberly Westrich 8 comments: Links to this post

Potomac River Running's Cherry Blossom Training Program starts this weekend (don't even talk to me about the potential historic snowstorm that is coming...), and I am really excited. I'm the head coach for the Reston program, and I'm working with a team of five coaches who have so much enthusiasm and commitment that it is going to be contagious!

The team met yesterday to get to know each other, learn about how the program works, and brainstorm ways to make it fun while providing all the information our participants need to make their race goals a reality.

Most immediately, we are planning a kickoff event on Thursday evening at the PR Reston store for both registered Cherry Blossom trainees and potential trainees who want to learn a little bit more about the program. I'm looking forward to meeting this year's runners and starting their Cherry Blossom journeys off on solid footing. See you Thursday!


PS - it's not too late to join us! More details and registration information are here
Posted by Kimberly Westrich 4 comments: Links to this post

In the days leading up to the Fairfax Four-Miler, I found that I was having trouble generating the same level of enthusiasm I had for the race in 2014. When my packet was inadvertently left out of the group packet pickup, I even took it as a sign that maybe I should skip it this year, and stay home with my family and my sick kitty. A few things helped get me out there:

Glow-stick accessories make this nighttime race even more fun. Although I am reminded each time I am out there on the course that it is pretty well lit in most places, so the glow-sticks don't really carry the same impact as actual lights. Maybe I'll remember that for next year. Here are some of the fun things we made:


I knew I wasn't quite in PR shape, so I ran one of my favorite kinds of races - social at the start, competitive at the end. Deb and I ran together for the first 3 miles. Deb moved to Lesotho just as I was getting to know her. I wanted to get to know her better and really enjoyed sharing some conversation with her for most of the race.

Then for the last mile, I ran hard to see what I could do. I got progressively faster over the mile, and for the last tenth I went from an 8:30 min/mile pace to 6:30. That little burst of speed at the end felt good. And Rick texted me that I "beat" his time from his New Year's Eve race - the catch being that his race was a 10k, while mine was 4 miles. But I'll take it!

After the race, some of us went home, some went off to other parties, and some went out for a beer before heading for home or other parties. Last year I went out for the beer, this year I really wanted to get back home. I was so glad that I had pushed myself to come out and race, and I let that be enough. Driving through my neighborhood on the way home, I was struck by the beauty of the Christmas lights lining the streets. I felt peaceful and grateful.

Happy New Year to everyone - wishing you a runtastic 2016!
Posted by Kimberly Westrich 5 comments: Links to this post

Get posts by e-mail